By Shauna Vo Pulayya, Director of Content Marketing on November 30, 2016

We had the chance to sit down with Zachary Green, Founder and CEO of MN8 Foxfire/LumAware. Zachary served in the Marine Corps for eight years. He also served as a volunteer firefighter for 15 years. He’s a true veteran entrepreneur who has owned his own company for the past six years. MN8 Foxfire/LumAware specializes in the development and implementation of safety products utilizing advanced photoluminescence technology. Here’s Zachary’s story.

SS: Tell us the story of Zachary Green leading up to founding MN8 Foxfire.

ZG: Ever since I was a very, very young kid I wanted to be in the Marines. My friends were outside riding their bikes and playing soccer but I was running in the woods putting mud on my face pretending like I had machine guns. My parents kept thinking I would grow out of it but I kept getting more and more interested.

When I turned 18 years old, I signed up for the Marine Corps and went to Parris Island. I was in university at the same time. After serving and being enlisted right out of college, I went through the officer candidate program in Quantico. So, I got to experience both the officer side and the enlisted side of the house.

I got out of the Marine Corps, started my career in the software industry and I felt like there was something missing. I missed that brotherhood, I missed that camaraderie. In all honesty, I missed playing with dangerous toys and blowing stuff up because you can't really do that as a civilian. So I joined the next best thing, which was the volunteer fire department. I started volunteering right after September 11th. I felt guilty that my brothers were out there going to war and I was sitting at home on the couch. I wanted to do something to protect and serve.

SS: How did you see a need for and have the idea to use advanced photoluminescent technology for firefighter products?

ZG: I joined the fire department about 15 years ago as a volunteer. I like to say in the Marine Corps, we take stuff that's really fun and we make it as miserable as possible. In the fire service, we take stuff that's really miserable and make it as fun as possible.I was on the back of my tailboard one day looking out at all of the helmets and started thinking about when we enter fires. The smoke rises and it blocks out the light. Most of the time the electricity's out and you're in complete darkness. It's very difficult because you get disoriented and you lose track of your tools and your crew. Firefighters are inside of small buildings and it could take 20-30 minutes to find your way out. You may only have 10 minutes of air left and that could be lethal.

I thought, how can I help my fellow firefighters find their way through the dark? I remembered a TV special about Sept. 11th and how they used photoluminescent technology. This isn't the glow-in-the-dark stickers you have on the ceilings. This is like glow-in-the-dark on steroids. It's so bright it lights up the whole room.The World Trade Center was designed with this photoluminescent technology in the stairwells, which is what really helped 16,000 survivors evacuate safely. What if I could take that same technology and apply it to accessories that firefighters could use to see each other and not have to worry about batteries, light bulbs, and electricity? Anything with batteries and light bulbs is going to fail when you need it most. 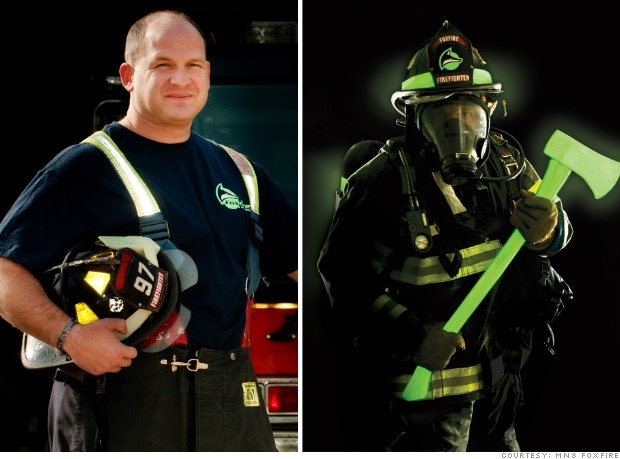 I came up with a prototype. I put photoluminescent pieces on my firefighter helmet. Then, came the time to test the product. I go into a fire, it's totally dark. You can't see anything, we're crawling around in a hallway trying to find the source of the fire. I feel someone trying to take my helmet off. I turn around to do naturally what anyone would do – slug the guy that's trying to take my helmet off. He looks at me, his eyes are huge and I could see the green glow off of his mask from my helmet. He's pointing to my helmet and I'm pointing to the fire down the hallway and say, "Let's put the fire out!" He's like, "Let me see your helmet."

We put the fire out and go outside. I suddenly had a group of guys with $20 bills saying, "Hey, can you buy me one?" I said, "Well, I just made it." They said, "Well, can you get a couple more made?" I make a couple more, sell it to those guys. Then, the fire chief from the neighboring community calls me up and says, "Hey, can we get 30 or 40 for our department." I didn't have 30, so I made more. Over the next six months, I sold these products straight from my car to local fire stations. I said, "Hey guys, this is something that could help save your life and reduce disorientation."

SS: What made you take the leap and invest all of your time?

ZG: I had a great job at Eli Lilly at the time. I'd been there for about eight years doing everything from pharmaceutical sales to marketing to brand development and I learned a lot. It’s not about the product that you have, it's how you brand it, market it and distribute it. You've got the greatest product in the world, but if nobody knows about it and there's no way to grow it. You're not going to be too successful. 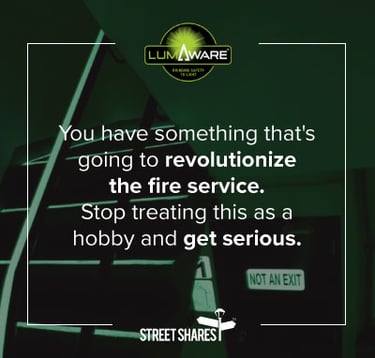 So, I refinanced my home, I maxed out my credit cards, took literally every penny that I own and I bought a bunch of this incredible pigment that glows and started to build up an inventory.

I decided to jump all in and went to the largest trade show in the world for firefighters. We wanted to let firefighters experience our product. So we created a tent, held together with duct tape and zip-ties. We took firefighters into the tent to show them how the products glowed. Before you know it, the crowd got larger and larger. By the middle of the show we had almost a hundred people waiting to get in line to experience our photoluminescent products.The next month, we did almost $100,000 in sales, and it almost crushed me. I was selling product that I didn’t even have, I don't even know how I'm going to make this stuff.

When you're in the Marine Corps, as long as you've got a good plan, a good mission, you've got good people that are walking with you on that path, you can pretty much accomplish anything.

SS: When did you start thinking about financing and how did you go about it?

ZG: Once the company started taking off, I started hiring people, and I realized the challenge again was cash flow management. The banks will only give you so much money. They want to see three to five consecutive years of profitability. It's very difficult to grow and to be profitable at the same time, and that's where StreetShares came in.

We got into a pinch. It was about a year or so ago when we had a large order that paid us at a slow pace. Then we had two or three orders pop up out of nowhere and all of a sudden I'm faced with one of the most difficult things an entrepreneur faces – I don't think I'm going to make payroll.

I remember receiving an email from multiple companies very similar to StreetShares, but what I liked about StreetShares was that it is a veteran-run program. It was really designed to help other veterans. I knew that if I was going to trust somebody to do this, I would trust brother and sister veterans. It really saved us. I was able to get funding within a few hours. We were able to pay that business loan back and actually get a couple of other ones, including the Patriot Express Line of Credit.

SS: What kind of advice would you give to another veteran-owned business looking for financing?

The other thing to think about is your inventory. Say you have 10,000 units on hand. But what happens if your customer wants to order 100,000 units? That customer is probably not going to pay up front. There's going to be a lag time. I've also learned the time value of money and that means I'd rather have a smaller amount of cash up front now than a larger amount of cash down the road.

SS: How did the Marine Corps help you as an entrepreneur?

ZG: We tend to make things even more miserable than they need to be. It's interesting because I was just at a Global Entrepreneur's Summit. I was invited by the White House to represent the United States along with a couple of other U.S. entrepreneurs. There were entrepreneurs from 40 different countries at this event. We got to meet Mark Zuckerberg, the founder of LinkedIn, AirBNB, Uber and Docsign – all these incredible legends of Silicon Valley.

Someone asked, "Does it really need to be difficult?" Many entrepreneurs said, "Yes, it does need to be difficult. If you can't suffer and learn from those mistakes, when things really start to get challenging, you're not going to be ready for them." There’s an old parable that says, 'a smooth sea doesn't make a skilled sailor.' You need to have those rough times. The Marine Corps helped prepare me for some of the difficult things that I encounter now as an entrepreneur.

See also: Why The Military Is The Best Entrepreneurship Training Program In America

The best thing I’ve learned in the Marine Corps is the training. We’ve been trained to adapt, improvise, build integrity, dedication and teamwork. It’s the ability to say, here's the strategy, here's the plan, but as soon as that shot is fired down range, you can take that plan and just throw it up in the air. You have to be flexible with change.

I've been crushed a lot harder as an entrepreneur than I ever had as a Marine or as a firefighter. This is the hardest thing I've ever done, but it's that training on those intangibles that really helped us get through rough times. The question is how you react to it and how you're going to overcome them.

Zachary Green has made the most out of what he’s learned in the Marine Corps, civilian corporate world and as a firefighter to create a company that’s, as he says is, “lighting up the world.” His company is bringing safety to light with not only fire departments, but also retail stores. He continues to serve his country with MN8 Foxfire and LumAware products by manufacturing products in the United States at companies who employ the blind.

Zachary’s business growth is inspiration to many veteran entrepreneurs. He's been able to grow his business through a variety of means, including equity and debt financing through StreetShares. Another way veteran-owned businesses can begin growth is through the Veteran Small Business Award. The StreetShares Foundation is rewarding exceptional veteran small businesses with up to $5,000 each month. Click here to learn more.