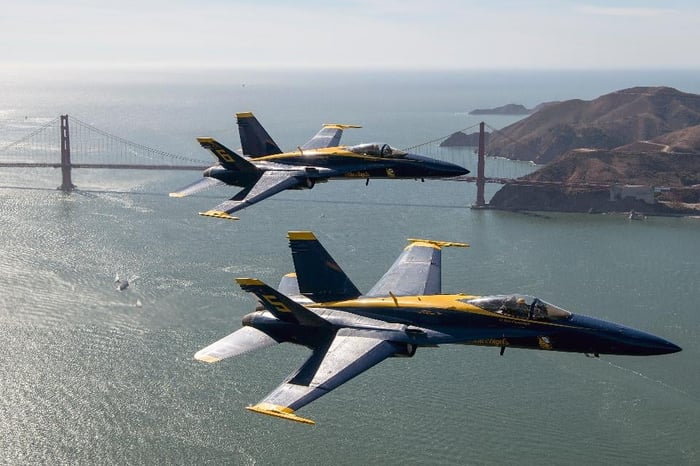 The US Navy Blue Angels numbers 5 and 6 fly near the Golden Gate Bridge in San Francisco, California as part of a practice run for Fleet Week on October 6, 2016. / AFP / JOSH EDELSON (Photo credit should read JOSH EDELSON/AFP/Getty Images)

This article was originally published in Forbes.

My co-founder and I launched our startup, StreetShares, outside of Washington, DC, which was not on the list. For two years now, people have been telling us to move our company to Silicon Valley. Even now, I write this article on a plane heading back from investor meetings in San Francisco where we were told we should move, yet again. We’ve resisted.

Here’s why many entrepreneurs, particularly “vetrepreneurs” (those with military experience like us), choose to launch their startups away from the conventional hotspots.

After military service, veterans tend to gravitate to their hometowns. The support of family, pre-existing business contacts, coaches, friends and mentors all create an enormous advantage. Typically your first advisors, team, and even your first customers are pulled from your own network. At StreetShares, nearly every one of our early team members came from the personal networks of the founders, or the networks of one of our first employees. Because your network often revolves around where you grew up, went to school, or worked before (or after) the military, it is natural to return to these areas to launch your company and can often contribute to a more positive, supportive environment.

Businesses should be near their customers. Even in an age of boundless internet markets, physical location is extremely important—although sometimes the reason is subtle. For example, StreetShares provides veterans with small business funding in the form of loans, the patriot express lines of credit and government contract financing. Despite being a national, online lender, 30% of our customers are right here in the D.C. area. Why? Because many startups in the D.C.-area serve the government market, and veteran-owned companies often get preferences in government contracts. In short, even as an internet-based business, we’re physically located near a sizable subset of our market. There’s an entire ecosystem around veteran-owned businesses in the nation’s capital, and we’re located right in the middle of it.

Where should a veteran entrepreneur start? Download, "The Ultimate Guide for Veteran-owned Small Business."

This is often the biggest reason startups feel compelled to move to Silicon Valley or another startup hub. And for good reason. The National Venture Capital Association reports that from 2010 to 2014, 38% of venture capital deals went to businesses in Silicon Valley. On a dollar basis, the number is even higher. Entrepreneurs believe they must move there to get the capital. But what if we expand the definition of “startup” to include all new businesses started by entrepreneurs?

They must rely on self-funding, bootstrapping, loans from a hometown community banks, online funding sources such as peer-to-peer lending, social lending, or crowdfunding, or the support of family and co-investors. These resources are not tied to a few zip codes in Northern California or to major high-tech urban centers. Indeed, most entrepreneurs will find the most abundant resources exist in the locations where they have the most abundant personal relationships, not to mention a much lower cost-of-living.

See also: Why is it so Hard for Small Businesses to Get Loans?

On a Bay Area trip recently, I met with startups in the SoMa area of San Francisco. The battle for coding talent in SoMa is so fierce that startups are offering starting salaries of more than $160,000 and a million dollars in stock options just to get junior web developers in the door. Why? Because SoMa has a large number of startups competing over a finite pool of software developers. As a result, coders tend to hop from one startup to the next, building their own little venture portfolio of startup stock as they go.

That’s a problem if you’re the business owner trying to retain talent. Many other cities have equally qualified software talent, too, but without the competition premiums. For example, Washington, D.C., and Northern Virginia—where we launched—has outstanding coding talent and fewer viable startups. That gives growing startups like mine prime picking of the very best entrepreneurial-minded software engineers in the region. And this rule doesn’t just apply to coders.

A new company needs marketing gurus, finance, legal, operations and sales experts. To find talent, consider a medium-to-large city with a highly-educated population, great universities and a large pool of young professionals. For example, The Bunker Labs, a Chicago-based network of veteran-focused startup accelerators has facilities in growing cities like Austin, Jacksonville, Nashville, Raleigh-Durham, and Madison .

All markets are shaped by external stakeholders other than customers. These may include key partners, suppliers, support organizations, investors, mentors, the media or local governments. For example, StreetShares is innovating within the highly regulated sectors of banking and finance. As a result, we consider state and federal regulators to be key stakeholders in our business. Access to regulators is important to us, so we set up shop outside Washington D.C. within close proximity to the lawmakers and regulators that care about our industry. Rather than fixating on a popular startup hub, it may be more useful to identify the location of your key non-customer stakeholders. Then move in next door .

Learn from the vetrepreneurs: When launching your business, look beyond the usual startup city lists. Just be prepared to rack-up some serious frequent flyer miles.

As a veteran entrepreneur and business owner, we understand what you're going through. That's why we've put together, "The Ultimate Guide for Veteran-owned Small Business." It's chock full of resources for veteran small business owners. There's also a complete section on financing your small business. Get creative ways to fund your veteran business such as veteran business loans, lines of credit and government contract financing.

Mark is CEO of StreetShares and an Iraq War veteran. His mission: build the next great generation of American small business owners. Find his veteran-business guide here. twitter:@markrockefeller