Defense Spending is Back: What the National Defense Authorization Act Means For You
| StreetShares Blog 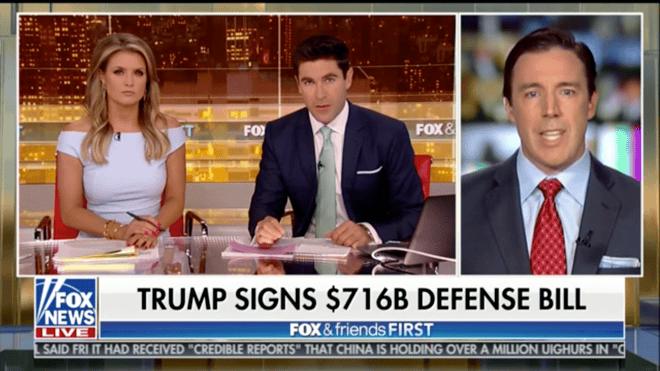 The John S. McCain National Defense Authorization Act was just signed at Fort Drum, NY.  Nearly $717BN in defense spending will soon be making its way through defense agencies -- what does this money mean for national security and where is it all going? Will any of it be making its way through you? StreetShares, Inc. CEO Mark L. Rockefeller recently appeared on Fox News to break it all down.

"There's two particular groups that are going to be very happy about this," said Rockefeller. "The first is the military members themselves. They get a 2.6% pay raise, which is the largest that they've had in about 10 years- actually since I was last in, in 2010. And the second is the defense contractors down the road here in Northern Virginia. There's a lot of money to be spent to buy new equipment as well."

There are three major themes to the National Defense Authorization Act-  rebuilding the defense infrastructure, putting an end to undesirable foreign investments, and defending against cyber warfare. Some of the $716 billion authorized by the Act has already been allocated towards 15,600 additional troops, $500 million in missile defense, 13 new Navy warships, and of course, the well-deserved pay raise for our military members themselves.

"I think it sends a real strong message to our troops and their families that the American people are behind them when you give them this kind of pay raise which they deserve," Rockefeller said at the close of the segment. "They deserve that and more."

The signing of the National Defense Authorization Act is huge news for defense contractors- make sure you're prepared for the influx of spending and contracts as a result of the Act. Get funding secured now so you don't miss out on any opportunities! Click here to learn more about our contract financing options, including invoice financing, term loans, and our fast and flexible Patriot Express® Line of Credit.