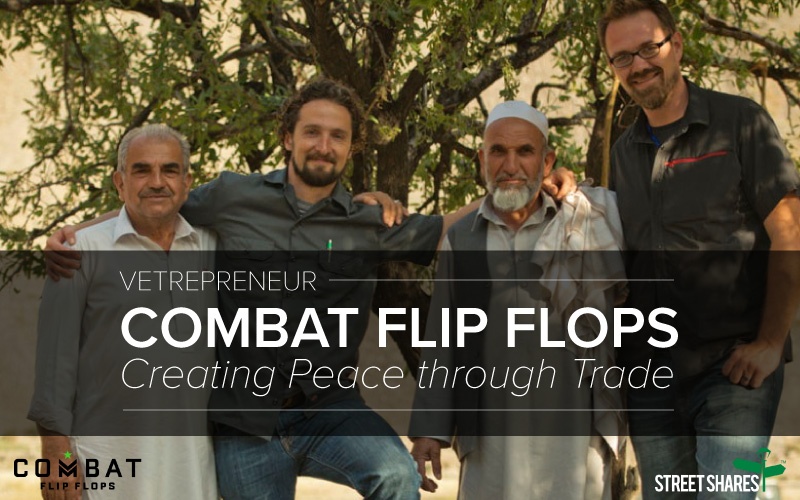 Veteran small businesses make up approximately 2.4 million U.S. businesses or 9 percent of all American firms, according to creditdonkey.com, a credit card comparison and financial education website. Veterans have built a set of specialized leadership skills and work ethic that makes them successful business owners. Indeed, it’s not only about what veterans did while on duty, but also what they do when they come back home. And transitioning back to civilian life can be one of the hardest times. This is why entrepreneurship is usually a great fit for many.

Today, we would like to tell you the story of a Veteran entrepreneur and his ecommerce company, Combat Flip Flops. Meet Matthew “Griff” Griffin, former Army Ranger of the 75th Ranger Regiment. His experiences in Afghanistan, both from his time in the U.S. Army and his later return with a medical service and rescue company, led him to create his own business. Combat Flip Flops creates products that empower consumers to promote peace through trade by manufacturing footwear, apparel and accessories from war-torn countries.

Griff talks about his time as a soldier in Afghanistan at TEDxTacoma, walking through the villages surrounded by the beautiful countryside, watching the people struggle and interacting harmlessly, with the children – until something horrible happened to those children. These incidents broke his heart. He often thought his time and the purpose of the military in Afghanistan was unnecessary.

"If you’ve never been to Afghanistan, it’s tough to understand the terrain, environment, and poverty of the country. It is heartbreaking to a degree. I went there with one mindset on my first deployment and I left with my view completely changed."

After leaving the Army in 2005, serving his country internationally in other ways, and eventually returning to Afghanistan as a Military Account Manager for Remote Medical International, a medical support organization, he saw an opportunity to help these hard-working, creative people who wanted safe jobs.

He looked at the data and saw that the GDP of Afghanistan has increased six times in 10 years from 2002 to 2012. This is huge growth compared to the past several decades of economic downturn and political unrest. (See the chart.) During this time, he visited a boot manufacturer in Kabul where he had the idea for his business. His feeling of despair after deployment turned into action.

Operating under the belief that an economy drives education, politics, and the military, Griff wanted to prove that economic development can positively affect conflict zones. His hope was to build a business that would be the first of many businesses to adopt this mindset of commerce over bloodshed.

Armed with his crazy idea and a vision of peace, Griff launched Combat Flip Flops in 2010 with his co-founders, Donald Lee and Andy Sewrey. While their vision was to manufacture their products in Afghanistan, Griff, Lee, and Andy ended up making their first marketable footwear themselves in a guerilla flip flop factory—Griff’s garage.

Combat Flip Flops is now an international operation producing flip flops, apparel and accessories while helping communities in different war-torn or developing countries. The flip flops are made in Bogota, Columbia, providing jobs and investing in people. Sarongs are handmade in Afghanistan by local women. Each product sold puts an Afghan girl into secondary school for a week. Artisans in Laos create bangles and bracelets from bombs that were dropped in the country during the Vietnam War. For each bracelet sold, 3 square meters of Unexploded Ordinance (UXO) gets cleared.

Griff and his partners worked together as Veterans to build a small business that has grown to thousands of employees around the world. Their story is one that StreetShares has helped fund. As an operation that started in Afghanistan, it was hard to get insurance and therefore hard to get financing. Combat Flip Flops had to operate as a cash business for the first few years. That’s when StreetShares came into the picture. With the business loan they qualified for, Combat Flip Flops was able to grow more in a quarter than in a whole year.

Combat Flip Flops is one of many companies StreetShares has provided funding for through veteran investors. Subscribe to the blog to hear about our next big story.